My new swimming obsession is not a new pair of goggles and not any other piece of helpful kit or a particular Loch, its running. You either hate it or love it. It’s like cardiovascular marmite. I know, you are thinking, it’s nothing to do with swimming, trust me do you honestly think I would make you read a story just about boring running. I have enjoyed trying to stay fit, by running for a number of years. There are loads of great runs from my house and recently I have been regularly running up the Wallace Monument or up Stirling Castle.

Both are not a kick in the rear end off 5km, with good hills about 100m vertical ascent that really gets the heart going. The ancient surroundings also help the mental aspect of repeatedly putting one foot in front of the other. 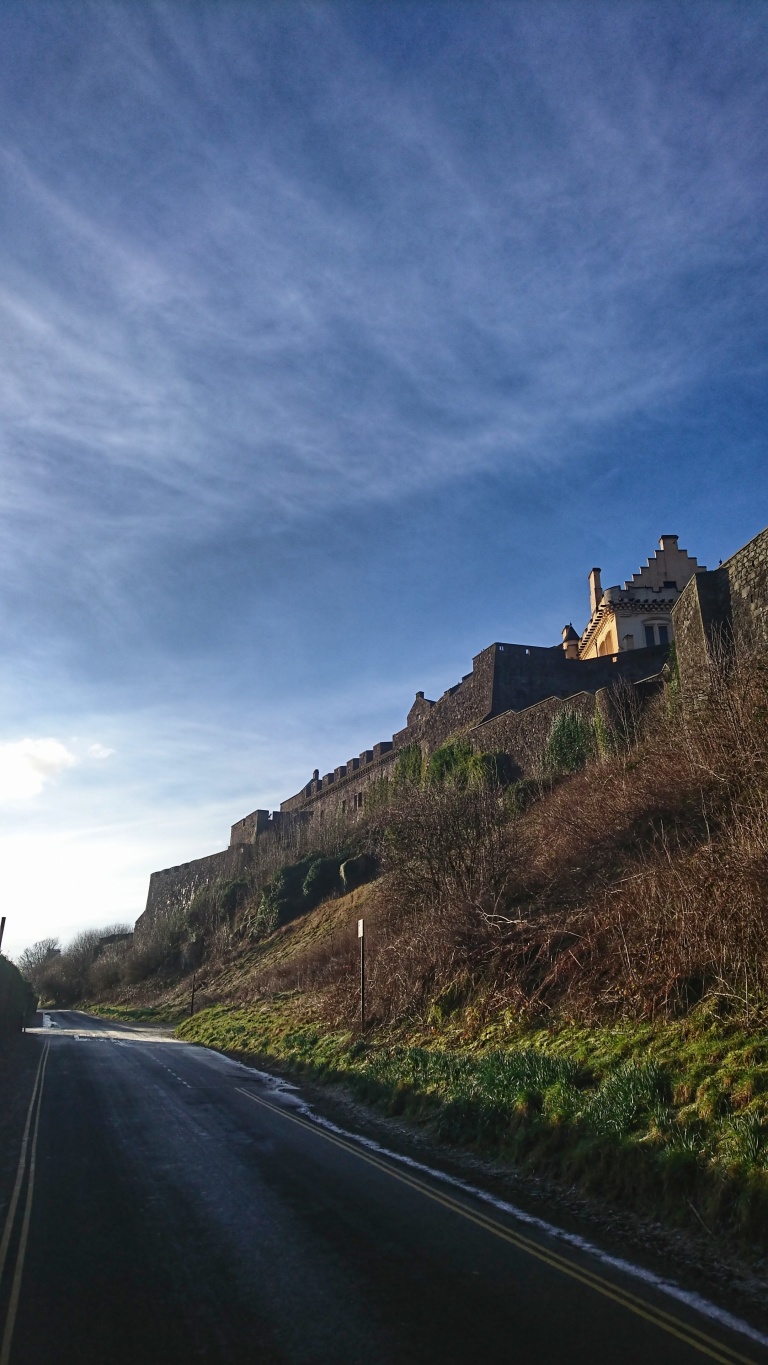 I have mentioned in a few posts I had started extending my running up Pendreich to Cocksburn Reservoir to include a few minutes swim and then a run home with frozen bent hands and feet. At the start of a run I struggle to move at any decent pace, my lungs refuse to fully inflate and my legs object to moving any faster than a moderate stroll. This changes after being in cold water.

Granted the first few minutes trying to advance with buckled hands and feet is torture and the mild hypothermia shakes don’t help either, but then a transformation takes place that I can only describe it as an “outdoors super natural high”, nearly like the rush from a “recreational disco biscuit” without the gurning or four day come down depression but with birds singing and rustling trees. The blood starts pumping, the endorphin’s start racing and with tunes banging on the headphones I find it hard not to sprint the few kilometers home. My speed is uncontrollable. My warming arms and legs start flailing about as I career down through the Mine woods above Bridge of Allan. This is not meditative stroke, stroke, stroke, stroke, breath swimming. This is a full on as fast as possible down through wet muddy trails with fingers crossed that there is no obstruction round the corner as it would be impossible to slow down never mind come a to halt. 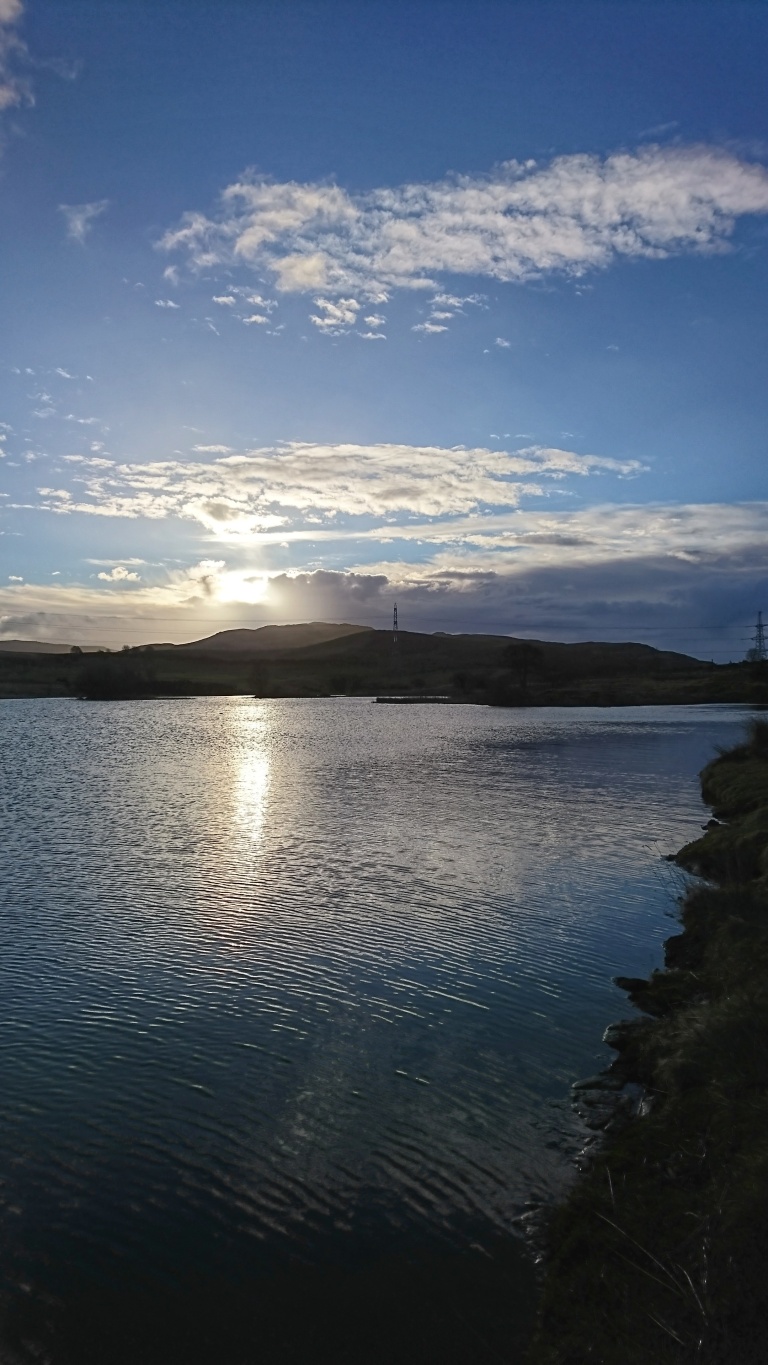 Getting this cold water running rush or high seems to have taken over my daily exercise routine and was getting a wee bit out of hand. It’s a 11km run round trip with 300m ascent. My knees were objecting if I tried it more than a few times a week. The time also was a problem. Grabbing a couple photos, removing earphones and running jersey, then meandering into the middle of the small Reservoir, saving time by keeping shorts and running shoes on (this is not about getting the quickest 100 meters or trying to drop my stroke count down, its a paddle and nothing more than to get cold) it was taking well over a hour closer two sometimes.

My first swim of the year with the West Wild Swimmers was at Luss. Winter went to its bed for the day and the sun came out. I managed my fastest swim ever. I got home and had my usual 12 slices of square sausage for breakfast. With the big yellow warm thing in the sky for the first time in months, Clare and myself didn’t want to waste it by finishing jobs round the house, we planned a walk together. Stirling is surrounded by loads of amazing walks with waterfalls and cliffs. Clare didn’t want to sit in the car to get to a walk so we walked down to the river Forth (who was I to object). Its a five minute walk from our house, through the ten year old housing scheme but as soon as you leave the estate and walk up the lane it feels as though you are transported to another land. The flat carse has uninterrupted views of Fintry hills, Ben Lomond and Ben Ledi with the River Forth below meandering by just meters away. We continued on the river path into a farmer’s field noticing evidence of winter storms with full trees and debris scattered half way up the field from floods over the last few months. There had been a lack of rain for a few days and the river was more sedate. There is a small sandy area visible when the river is not in spate. I would like to mention at this point that it was not me that had suggested we walk round the river so it was not my fault when I got my second swim of the day, but it was a bit premeditated as I had blue tack for my ears in my pocket and wore trunks under my shorts.

This started a River Forth obsession.

I swim solo in Lochs all the time. Sometimes I get the fear……. more often than not I get an incredible feeling of being alone, just a swim cap, goggles and thankfully my mouth bobbing about above the surface surrounded by peaty dark opaque water, hills, trees and sky that change colour by the minute, never mind by the season. It’s as I said, incredible. Rivers are not Lochs and they scare me. Really scare me. What if a tree comes down stream and skelps me? What if I get trapped in unseen tree branches, shopping trollies, a Mark 1 Ford Escort? What if a whirlpool sucks me under? What if I get dragged down river only to land on Bass rock some 60 miles away outside the Firth of Forth in the North Sea? These are just some of the extra fears added to the normal swimming fears. When I say normal, I mean wee niggles like the constant fear of cramps, hypothermia, drowning and man size man eating monster fish called pike, but these wee niggles are the crosses we wild swimmers bear. 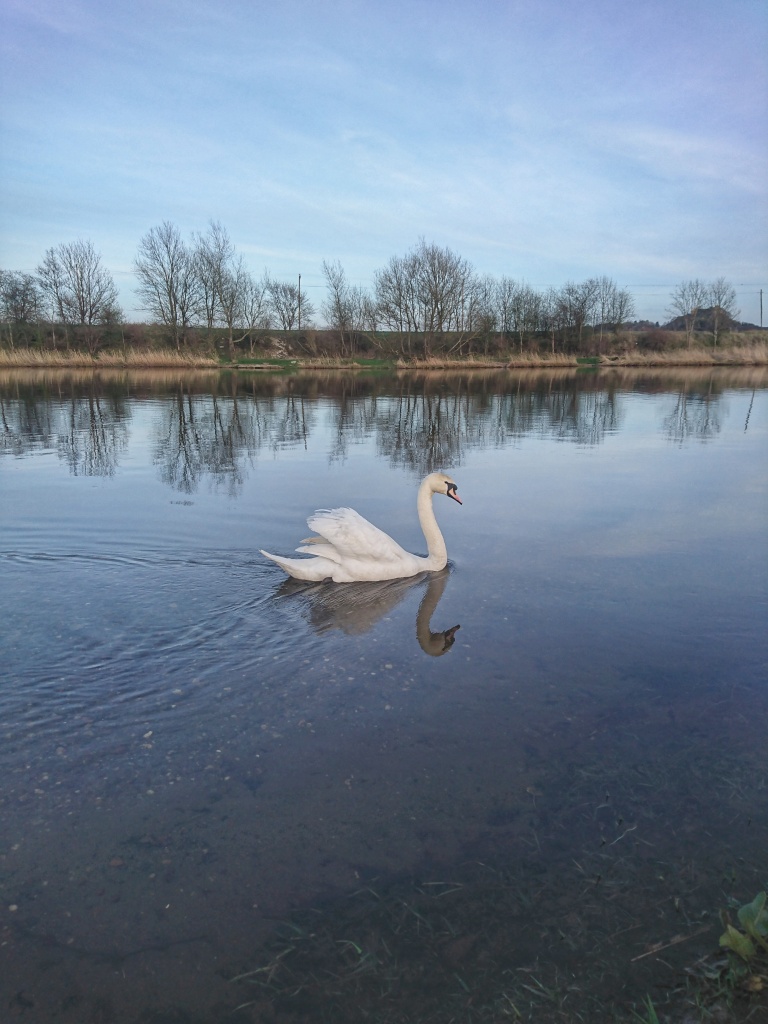 The following couple of weeks instead of doing my normal runs, I started taking the river path running across the river Allan just round the corner from the wee sandy beach where I had that wee swim. Then I would run along the waters edge to a pebbley beach for a ten minute swim before sprinting up the Castle on the way home about 7km or nearly 5 miles. Swimming in a river is completely different than swimming in a flat calm Loch. It’s like one of those motorised swimming tub things you get in rich or obsessed swimmers gardens but with sticks and leaves passing underneath you. I have mentioned loads of times I am not the best or most confident swimmer, so I decided to swim in the river about knee depth. Deep enough so my arms did not touch the bottom but shallow enough to stand up when I wanted not be taken down the river. You can experiment with stroke to see if you advance against the river or see what does not work. I cannot wait for warmer temperatures so I can stay front crawling for more than a few minutes without having to stand up. The river height went up and down with the tides and rain, making every run different.

On the way from the river to the castle you pass a fountain outside a local restaurant beside the motorway entrance. The water is pretty stinky so only once did I feel mischevious and hoping my immune system was strong enough to breast stroke up to the restaurant about 100m away. I giggled like a school kid all the way. 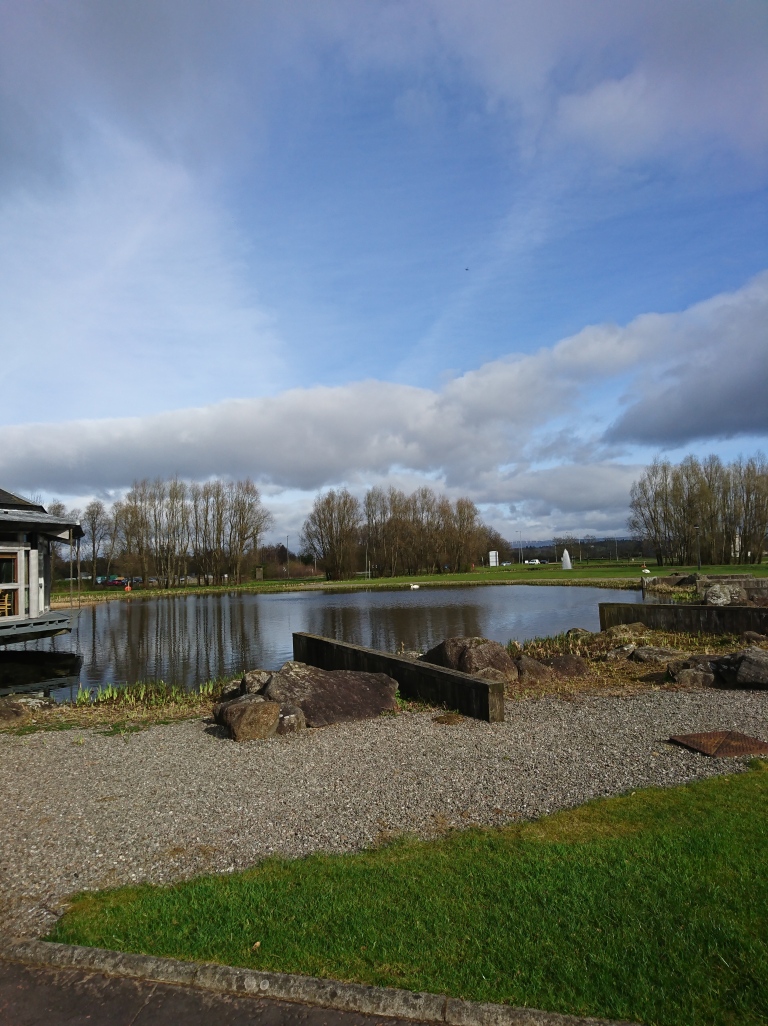 Hollywood and Mel Gibson made a movie depicting William Wallace, a battle and Stirling Bridge about twenty years ago – “you may take our lives but you will never take our swimming goggles…….. eh…………. I mean FREEDOM”. The movie was based in 1297 and that bridge was the only crossing for miles around. It has since disappeared and has been replaced with seven options, including road, rail and pedestrian for crossing the Forth north to south within Stirling city boundaries. 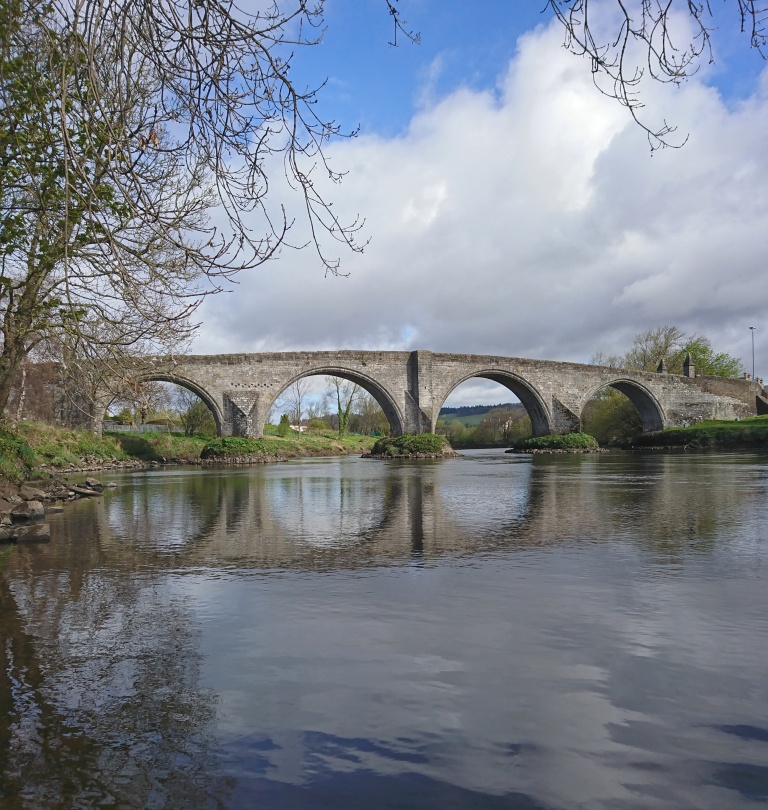 For years I have stood high up on top, looking down at the rushing water through the auld 400 year bridge arches. Its water (I am guessing) is 40 meters across and is affected by the tides and after mighty storms the water flows through in torrents causing crazy eddie’s and whirlpools that can be seen on the surface. It has and would be fatal if an errant adventurer miscalculated their ability. A couple hundred yards to the east and down the river from the auld bridge is the road bridge designed by the famous author Robert Louis Stevenson’s Grandad. At low tide, added with a dry spell, an area of rocks in between the two bridges can be seen for half the distance across the width. I had always wanted to cross here even before I started cold water swimming or having watery adventures. 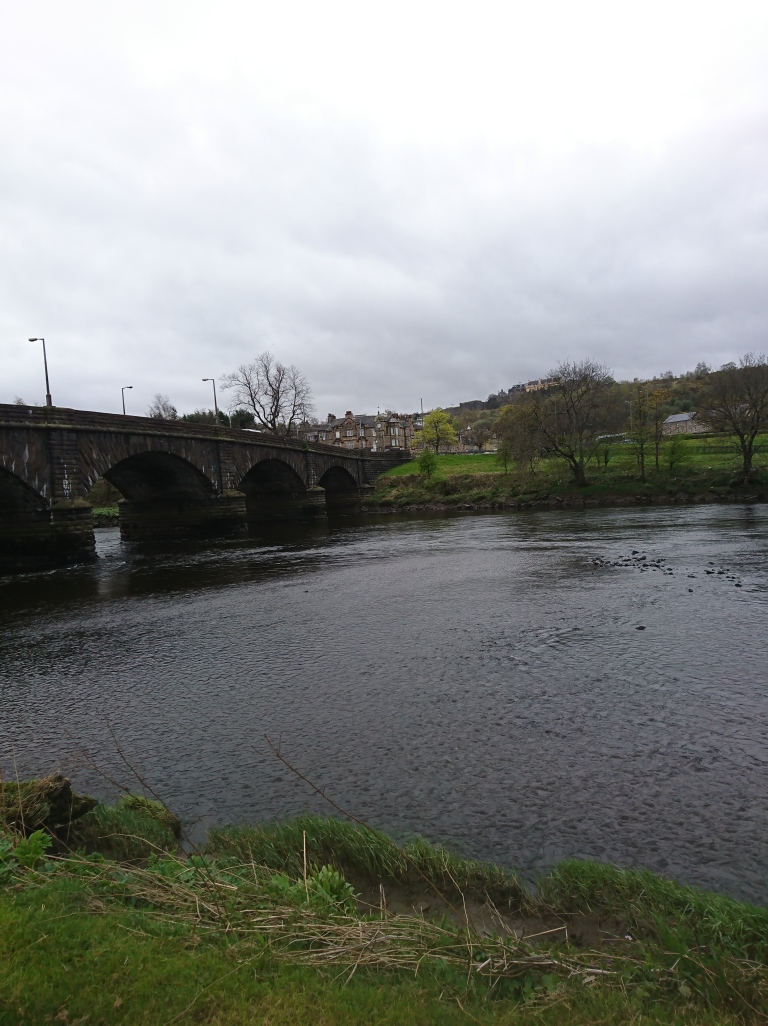 I left the house and headed for the now familiar path. Recent rain had caused me to swim across the river Allan with headphones and phone secured in my swim cap a few days earlier. This rain had not returned and also the size moon was increasing giving bigger tides or lower low tides. I ran up the path heading for the Allan scaring a few oystercatchers and a couple herons in the air. My shorts got wet as I ran across the Allan.

I reached the pebbley beach but instead of swimming directly against the flow I decided to try and swim across and back from North to South, the first time I had tried, a couple of fishermen laughed in disbelief at someone swimming in water temperatures roughly 7 degrees centigrade but everything went calm smoothly but most of all enjoyable, it was easy.

I ran off, heading for the Castle, the cold water stimulus had kicked in and I was charging up the Ballengeich hill towards the Castle, but unfortunately it also stimulated another need….it wasn’t the first time McDonald’s at the bottom of the hill had been used mid run for a toilet break but just not after a swim. There were a few shocked looks as I ran in with soaking squelching running shoes, dripping wet shorts, goggles and yellow swim cap on my head.

A wee while later I arrived in between the two bridges. This would be the first time, I wouldn’t use a bridge to cross the river at this point. I scanned for a safe entry point combined with the apparent safe crossing and potential exit points. I was filled with a mixture of concern and excitement as I stepped, jumped and slipped unceremoniously into the River Forth. There was power in the water but thankfully it was only up to my waist and I could walk without too much effort. I started crossing. Half way across I was thinking “Ave got this” and I removed my phone from the small dry bag protection. I got a couple of photos then decided to perform a wee Facebook live film.

Giggling and smiling and without too much effort, I reached the other side. The run home felt like a lap of honour. I was elated. I stopped the GPS watch at the top of my street and walked, well more like bounced down the road towards my house. My wife had watched the Facebook film and later told me she had wished she filmed me walking up the street. I felt like the bloke in the Police’s song – Walking on the Moon – she opened the living room window, I flung my hands in the air as shouted “ave done it, I crossed the Forth”.

You don’t need to think massive distances for massive adventures. My wild swimming adventures just keep getting better and better.

Please Swim Safe, I try to.

2 thoughts on “First to Forth”