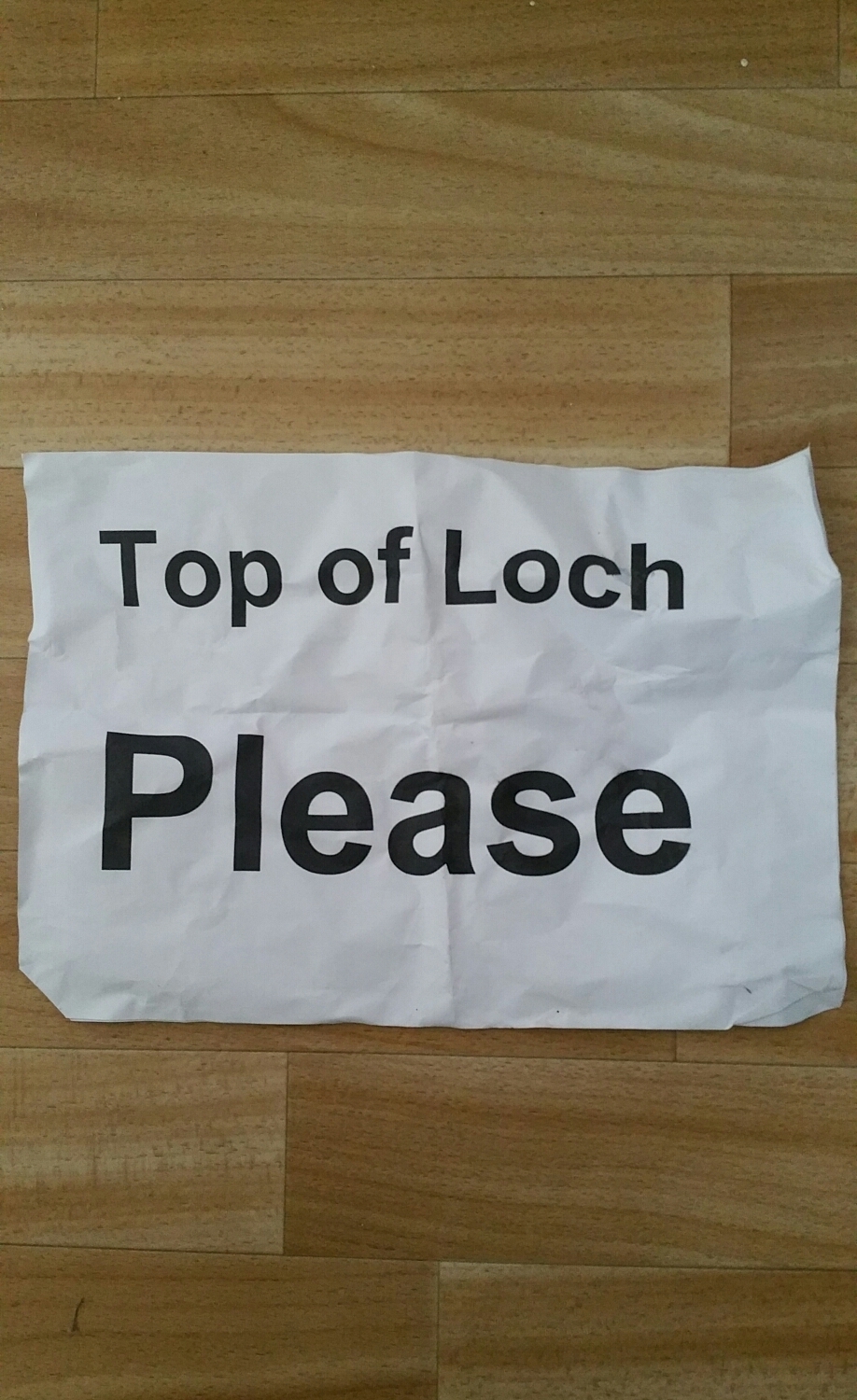 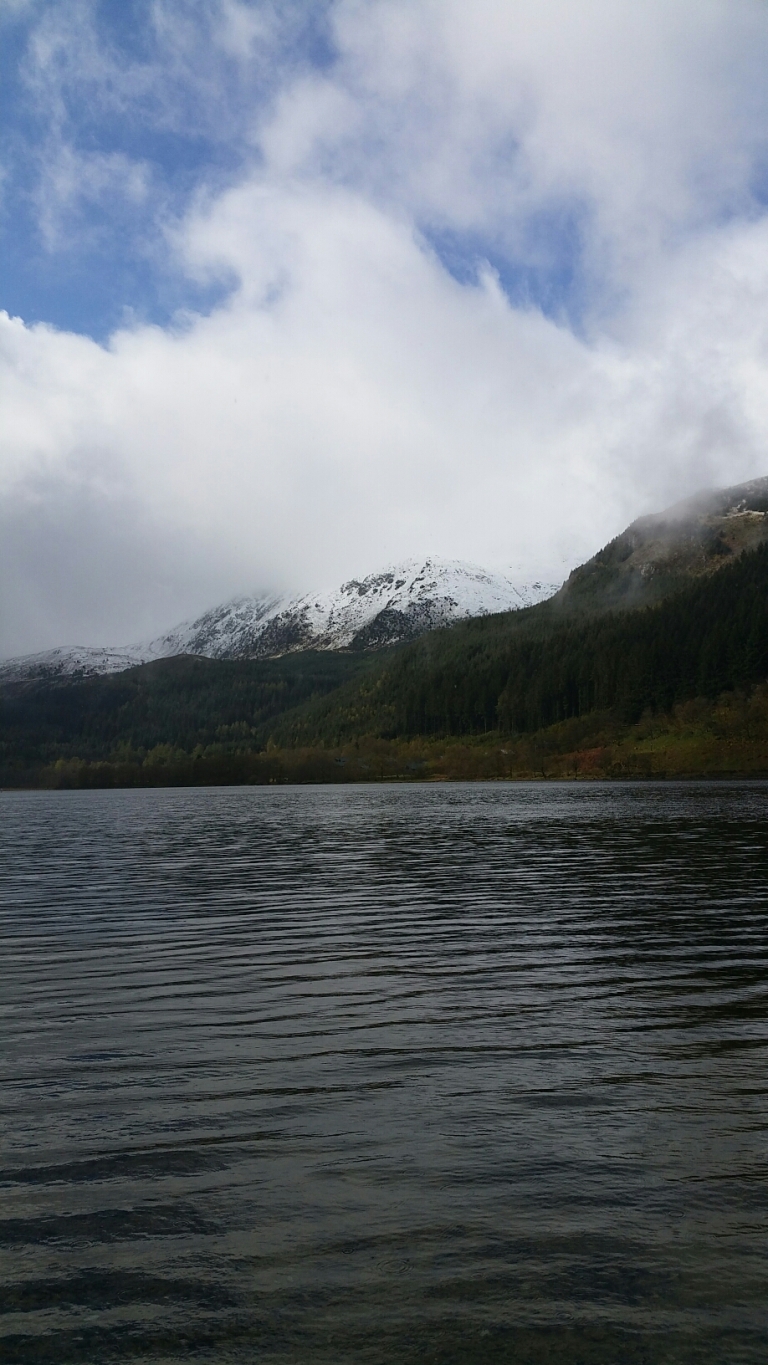 Loch Lubnaig’s murky, peaty water doesn’t taste bad. It comes down from the Balqidduider Glen, trickling down from many hills, including the south face of Stob Binnein and the north face of Stob a’Choin. I have had the pleasure of eating my lunch at the tops of both these hills. Stob Binnein was the first and last time I wore a pair of crampons. Running down the south face of Ben More towards the conical peak of Stob Binnein, I managed to lacerate my gaiter (boot and trouser cover). It could have easily been a main artery. It made me consider the dangers of running with “Edward Scissorhands” boots for about 30 seconds, because standing at angles of more than 45 degrees on sheet ice with crampons on, you feel invincible.

Never had them on since.

Stob means peak in Gaelic and Choin translates to dog. Stob a’Choin is an impressive hill. It is not high enough for the almighty Munro status, but all the more challenging for it. There’s no path, you make your own. You have to figure out how to reach the peak, instead of climbing with your head down following the deep ruts carved up the side of a hill by previous visitors, with security of a redundant map and compass in a goretex pocket. Munro’s may be higher, but the majority of them, situated close to Scotland’s built up areas and are nearly as congested as Princess Street in Edinburgh on Hogmanay.

A day in the Breadlabane Munro’s is for the views and fitness, never for isolation and topographic studies. Everything we conquer we have to name. Cook Islands, New York, Munro’s….. Scotland has not been conquered, lochs, hills and glens are still described. Kinlochleven or Ceann Loch Leamhain means head of Loch Leven, Beinn Dubhchraig means hill of the black rock. (Turnips, who decided to call turnips, swedes? Turnips are orange not a white fleshed smaller version. Think haggis, neeps and tatties. Neeps or turnips are orange. I don’t care what our neighbours call them, but we made turnip lanterns at Halloween not swede lanterns. Let’s take up arms or at least start a petition or complain to tescos call them by their correct Scottish name not their Anglofied cockney name.) I am only ranting about turnips not Munro “bagging.” There is a vast array of ignored walks in Scotland, which have visually stunning vista’s and are both mentally and physically challenging, but most of all, with solitude. In a world where personnel space is constantly encroached on and decreasing, time with your own thoughts, at your own pace, is invaluable. It keeps me sane and grounded, but allows my dreams to develop, adjust and become tangible. I wonder if this is why my crampons are in the loft? I now prefer being submerged with a view of 2 inches above an empty Loch Chon, rather looking down on it from the crowded peak of Ben Lomond. Having a reason for a walk is great but an accomplishment not to conquered.

I have visited Balquhidder Glen a few times.  I wish I could to describe the most memorable visit as damp and misty, where you could have been transported back nearly 300 years without realising it. The hairy cattle mooing in the distance could have been misappropriated by the legend Rob Roy McGregor during 1700’s. But no, I can’t. It was not movie style atmospheric Scottish weather of the glen that captivated me. I couldn’t even describe the weather accurately the day I had the pleasure of working at a farm over 20 years ago. The farmer was one of the coolest men I have ever met. A gentleman. He was calm and tranquil, but he had impeccable manners and showed concern for me and my co worker. He had built the best tree house I have ever been in, (even better than the restaurant in the trees tops of Alnwick gardens, but that’s more memorable for its tasty risotto). The tree house encapsulated most of an old oak tree, with views onto the water and glen though windows. He had incorporated the steps up to the first floor using the branches of the tree. There was a painting on the wall of a man sitting crossed legged. The mans eyes were looking out the canvas but I felt they were gazing inward. The farmer mentioned that the picture had evolved over 2 decades and was still incomplete. (I have been to a couple of galleries and seen some famous paintings, but the crossed legged man has been one of the most memorable paintings I have stood in front of.)

Water from the glen fills Loch Voil (this is on my swim bucket and spade list) and flows down the River Balvaig passed Strathyre into Loch Lubnaig. There are more tranquil, closer lochs, but the crooked loch, has become a habit of mine since September 2014. When at home, I will be in Loch Lubnaig at least once a week with the most being four times. During my last stretch offshore, I planned a big, but practical swim, with the confidence and knowledge that in March, when water temperatures were below 5 degree’s, I comfortably swam a few times from the north car park to the south car park and back again which is a distance of 2.3km. (Google maps measures the top of the loch to south car park distance to be approximately 5.6km.) My plan was to swim from the top of the loch to the north car park, a distance of 4.5km. If I could swim 2 laps of the car parks, a similar distance first, this would check my skills and stamina. 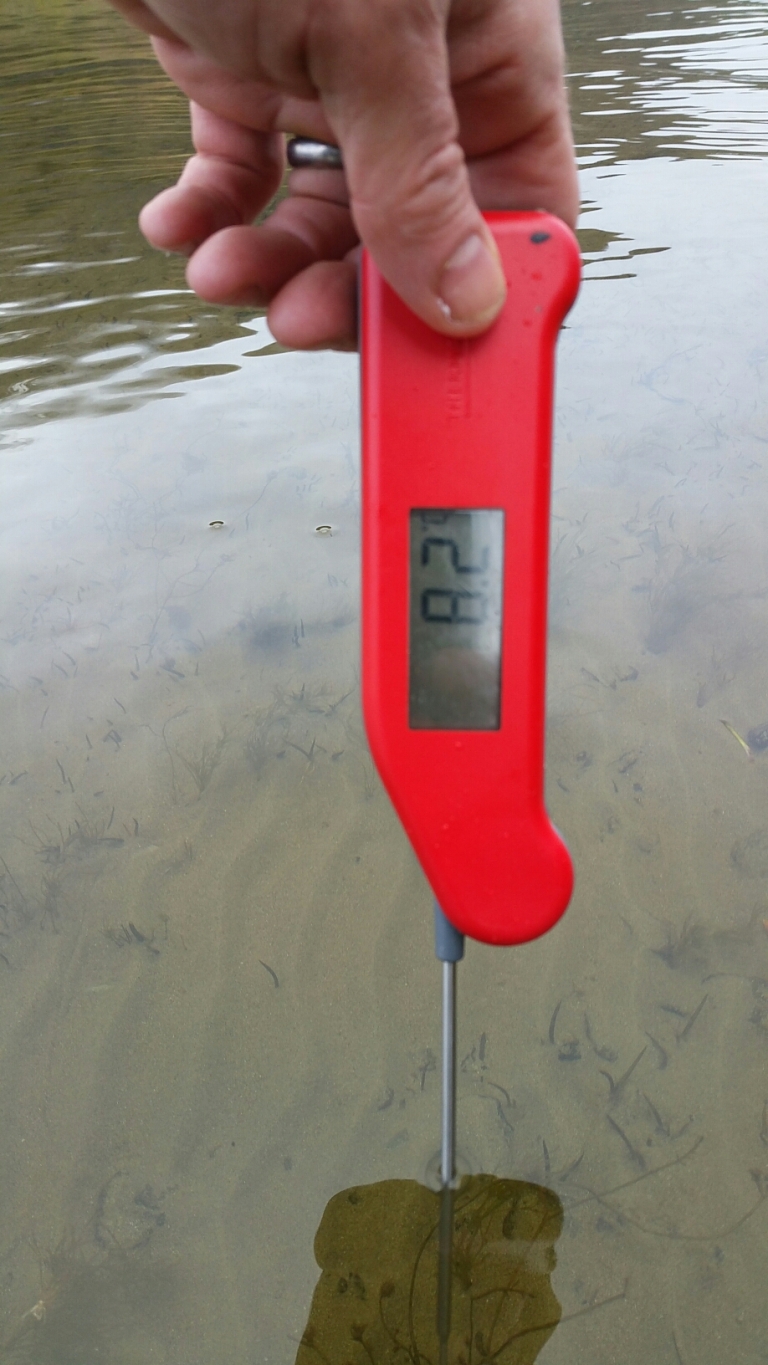 The first up and down  went by without incident. I hardly have to sight forward anymore, I can judge my position, angle and distance in the Loch by the view, while taking a breath, of Ben Ledi to the west and of the A84 to the east. On the third length, I entered into what I would describe as a meditative state. I was not concerned with stroke shape, breaths or monsters in the murky depths. I just swam. I have read about this state before and this must be why people can perform length after length in a pool for hours. This is the first time I felt it swimming. I constantly analyse my technique and progress. Am I crossing my arms? Am I engaging my lats? Do I really need to kick? but mainly, will I make back safely and am I showing signs of hypothermia? These thoughts batter at my brain like a 1000 wee doors slamming in the wind, and have never allowed me to fall into meditative state.

A couple of years ago I downloaded some meditating MP3’s and practised meditation for a time. Once, during breathing exercises and concentrating on having no thoughts I had a dream like vision.  I walked into my living room, my son was lying down on his belly on the sofa. I walked over, covered his body with my own body, giving him a massive cuddle.  I felt as though I was vibrating. It was the most incredible sensation. Like a rainbow of love flowing through my body (oooh yeh for real. Not unicorns and midgets but rainbows, it was pretty mad).

By the end of the forth and final lap, my arms felt like stone, heavy and cold but I’d swam 4.2 km. Whoo hoo, the plan was falling into place. The following Wednesday morning thoughts of my mortality were filling my head. My wife dislikes the fact I am swimming solo in lochs, so I never mentioned my big swim plan. I printed out a hitch hiking sign when the house was empty 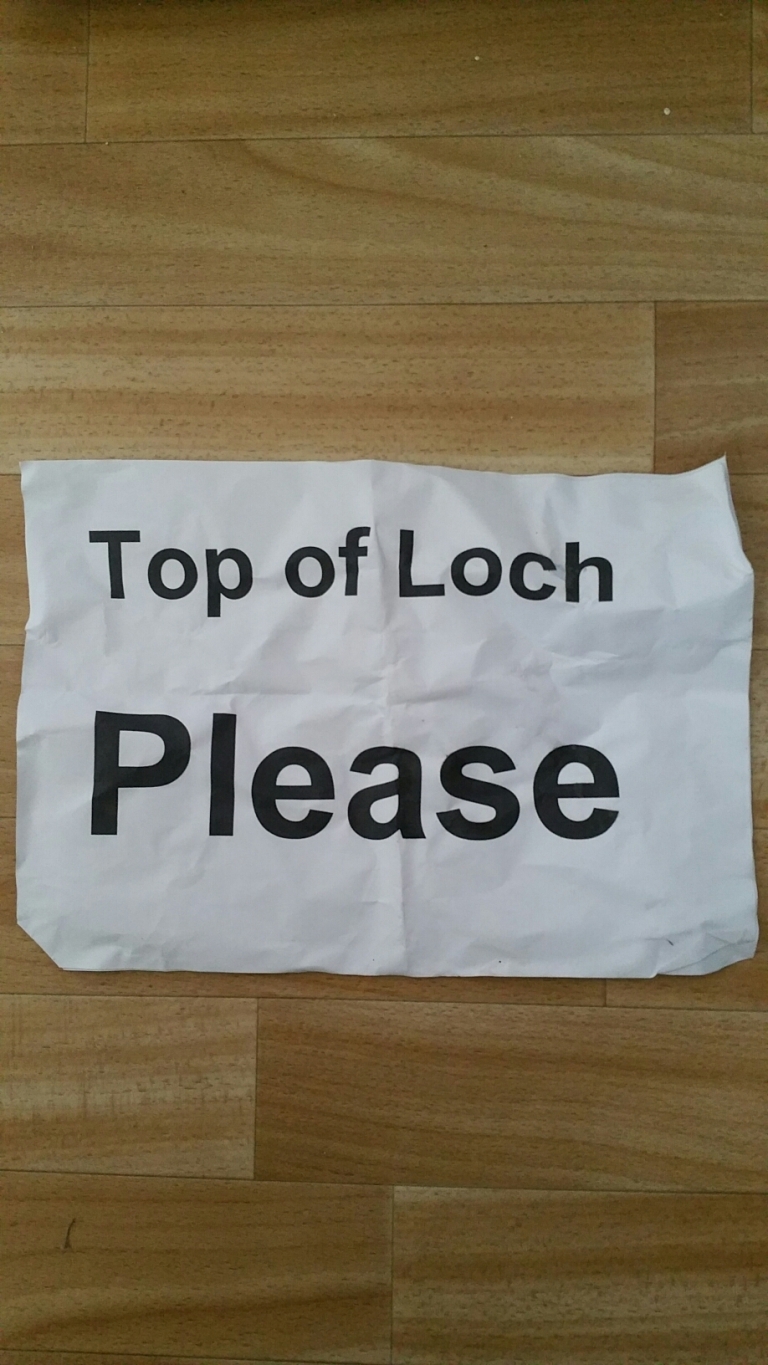 The swim was on.

Arriving at the Loch, the wind was breathless leaving the loch glassy, a mirror surface. Perfect conditions. Booted and wetsuited, with my yellow swim cap and goggles on, I got a few bemused looks with my thumb sticking out waiting for a lift. Two guys getting their breakfast at the cafe /shop gave me a lift from the car park to the lay-by at the top of the loch. They were also bemused at my plan. I wish I could say that I fell into a meditative state for any part of swim and emerged like grasshopper back at my van,  but the feeling of dread and excitement never left my cranium.  Every couple of hundred metres I would have a “are we there yet?” moment look up catch my breadth, then perform a few breast strokes and then continue with front crawl. I was not disappointed, by not gaining a Zen moment. I was freaking elated having nearly conquered Loch Lubnaig when I swim the loch’s full length am going to petition the appropriate authorities to get name changed to Lake bodge. One thought on “Top of the Loch. Please”