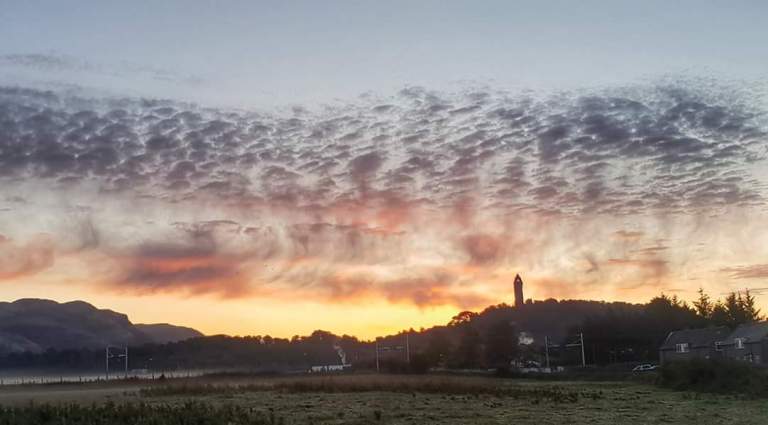 I didn’t have to Wait for my Man when I enjoyed 3 swims in one day.

I rolled out of bed early to get a run-swim before a grown up finance meeting with Clare my wife. Everything was going swimmingly. Infact, for a boggy smelly loch, I don’t seem to have any ill effects and only missed one day swimming in it for twelve days. Surely even Campylobacter would have reared its ugly head before now if the ultra sonic cleaners were not efficient. Half way into a planned 30 minute skin swim I was summoned towards a small jetty.

Young really angry dude – GET out

Him – Someone has died in there

As I banged my head trying to get rid of the water in my ears to hear better.

Me – after two weeks of swimming in here, I don’t think so.

Him – it’s against the rules

Me – I have the right to roam and it’s against the law for you to ask me to get out.

Him – where are you going

Me – to finish my swim

Him – I am going call security

Me – what are they going to do? Chase me in that rowing boat?

The swim continued. Luminescent jacket wearers arrived on mass at the small jetty. They didn’t know my phone, shorts and top were somewhere else. After half an hour swimming in only trunks and running shoes in roughly 12 degrees water, I required to keep moving and knew I had just managed to put a hat on my head never mind get involved in a discussion of a grey area of Scottish law.

The Land Reform (Scotland) Act 2003 (which came into force in 2005) gives everyone rights of access over land and inland water throughout Scotland, subject to specific exclusions set out in the Act and as long as they behave responsibility

It’s seems black and white. But it’s not very clear.

This was the second time in a week I have had discussions concerning the land reform act while trying to swim.

Last Sunday we left Lake of Menteith’s shoreside because of evidence of blue green algae and we headed to the nearest bit of water, Loch Rusky. Its a gorgeous wee loch. I recently received a birthday card with a painting of it on the front.

We have swam in it once before, for a short winter swim last year. This day was blue skies and no wind, great for spending time in the water.

I understand these dudes want to enjoy themselves, and they pay a shed load of cash to allow them to cast their rods. I wouldn’t play football on a bowling green or take my mountain bike on the golf course. Why did I think it was okay to have a wee swim in a fishing loch. I thought so at the time. We left without disturbing the old timers or their fish. It wasn’t threats of exclusive rights or the authorities, there was more blue green algae in the water.

I have deleted a large chunk of this original post and had a word with myself. The fishermen in boats have never seemed to bother when I have swam across lake of Mentieth. So maybe this is why I thought it was okay to disturb the dudes at Rusky.

Does swimming mess with fish, do some edjits splashing about on the surface halt the sport. If so, the Landowner does have the right to restrict or prevent access if they perceive disturbance or damage has or is being done. If the fish are not to fussed then the old timers might have to get used to getting disturbed.

You might have guessed from the photo of the flags we sauntered off to Loch Lubnaig.

My second swim of the day following the Airthrey Loch adventure was more of a paddle on the wild side than a walk. I have two paddle boards. A large 11 foot solid board straps to the top of my van. Not a problem until the van goes missing (don’t worry, it was found and returning home soon). 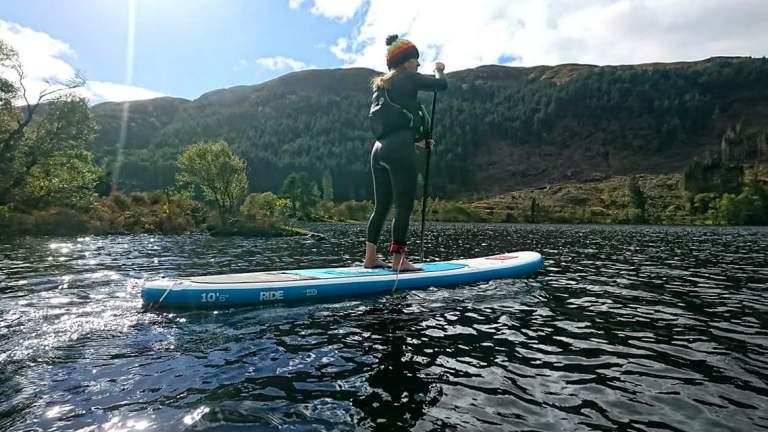 We could only fit the inflatable paddle board in the car. My wife doesn’t really enjoy water and only puts up with it during warm and sunny days. I was surprised she agreed to an afternoon adventure at Loch Chon, but I guess the blue skies helped.

Clare had only been on the board a few times and the earlier blue skies had disappeared behind grey clouds. I don’t know what got pushed more that afternoon the board or her comfort zone as I followed her up round the islands.

She was more Sweet Clare than Sweet Jane. It was a brilliant short few hours together. That paddle alone would have constituted a great day but I still have one more swim to blether about.

Before that, I have to continue my blether about the right to roam and access to the Uni loch. My goggles have not fogged up enough that I cannot see I am not entitled to walk or splash where I want. Yes yes I know I mutter loudly “you may own the deeds but we own the land.” but I am completely aware the law is a priviledge. We shouldn’t risk the chance of our grandchildren not experiencing the same opportunities we have been given. Only by us performing needless acts of destruction or disturbance will the law be revoked, similar to the Loch lomond national park’s and national trust’s stance on wild camping.

My swimming is not blinkered either, I am not slapping away at the water performing the front crawl staring down at the bottles and cans discarded on Airthrey loch’s bottom, oblivious to the fact that people might be influenced by my actions, I am aware the University don’t want drunken edjits trying to find a short cut across this water.

What did they expect though, they built a campus round a loch and then bought and installed ultrasonic cleaners?

It was suggested we perform stealth swims to stop any dealing with the hierarchy. 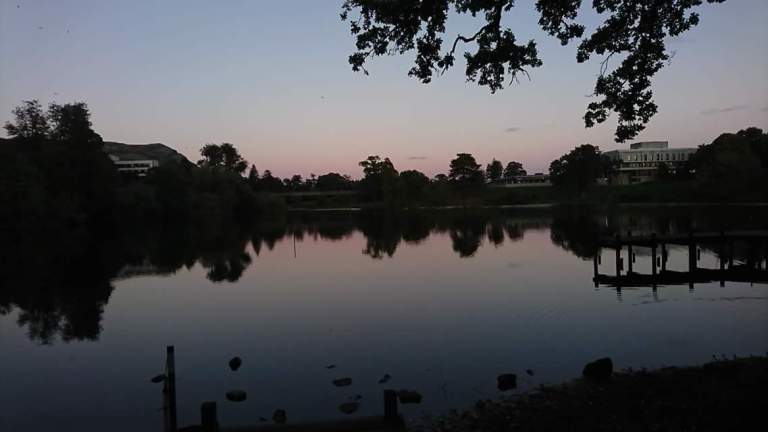 But I think that pushed me even more to advertise my intentions. To be told yes or no.

Yeah naw yeah or maybe, doesn’t really do it for me.

If it’s a no then I will return to the lochs in the Trossachs ( and may be the odd stealth swim………..obviously)

Drunk folk will go in the loch, lets be honest, lets not swim away from the fact. Hopefully by not hiding in the depths, we can push the adults in charge to accept, establish and nuture a culture of safe use for the loch, including the return of canoes and kayaks and the introduction of paddle boards. If we are lucky, this will be more than installing a few signs saying you will die, maybe this education will take the form of a similar message described in the RNlI recent video called “Float”.

The Right to Roam act was introduced to remove the restriction on access, to increase our time spent outdoors that’s not just a daunder up a hill, thats access to inland water ways too. Swimming has transformed my life for the better not just physically but mentally. If correctly managed, Airthrey Loch has the potential of transforming a shed load of folk’s life’s in the area.

I was bored waiting for my trunks to dry when I started tapping out descriptions of swims on my phone, I know this collection of blogs reads a like a “don’t try this at home kids” manual. or ” What not to try when wild swimming” book. But to me they are record of some amazing adventures and I hope and think they contain the odd piece of evidence why it would be an injustice for Stirling’s community to have no or restricted access to healthy, clean water to swim in and paddle on. I really hope that Airthrey loch’s guardians embrace it

Spoiler alert: A dude from security rocked up this morning, a few days after writing the above ramblings and told me they can’t stop me swimming in the loch due to the access laws, ( Ooh ya dancer ) but I must swim at my own risk and was made aware of submerged dangers. Maybe if I had stuck around on Friday morning the shouty “get out ” bloke and me might have been informed, and I wouldn’t have spent all weekend digging imaginary trenches preparing for for battle infact in my case I would have flooded them for a protective swimmable moat.

Anyway, nothing changed We still are free to walk and paddle where we want. Scotland is Magic.

Please be respectful. The right to roam is not just yours, it’s everyone’s. 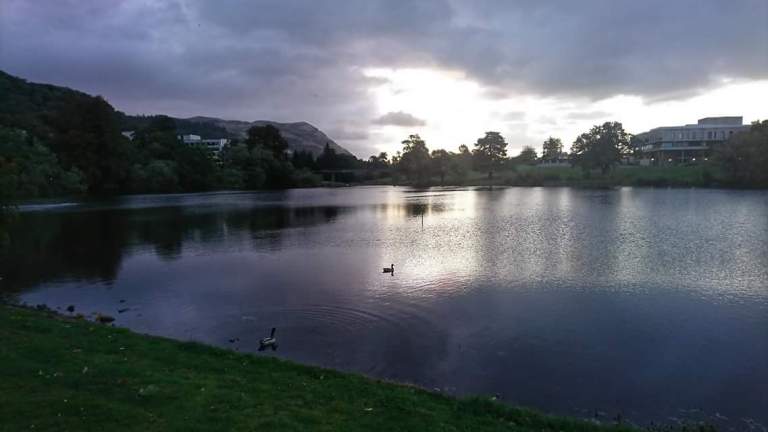 Finally the last swim description, bear with me we are nearly finished.

It was not Venus in Furs more like a halfwit in a kilt and Ugg boots that nearly got the car the stuck in a ditch on arrival at the rendezvous point for the, Loch Ard narrows night time adventure.

It was not a New Sensation I had swam it before last year, eight of us meandered down the river through wee lochans under a star filled sky holding onto our tow floats chatting more than head down front crawl. I got really cold near the end unable to hold a conversation

This year I was not taking any chances especially after having two swims earlier. I wore my shorty swim/run (3mm vandalised suit I made from an old triathlon suit )under a a 3mm surf wetsuit and neoprene gloves, socks, boots and a cap. There was 15 of us It was like herding cats. It was warmer than last year and I giggled and laughed as we floated all the way down the river. 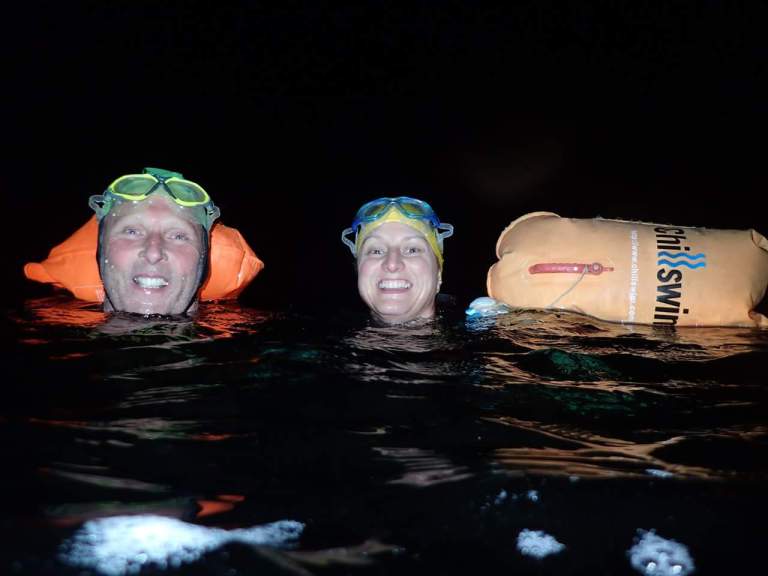 It would have been a Perfect Day if I didn’t wake up at 3am for an old man pee and my heed had not went into full on overdrive, burling away with the day’s events and had to start on the gumph you have just read.

Thanks for taking time to read it, and I would like to thank all that folk that are in and I who I stole photos from.