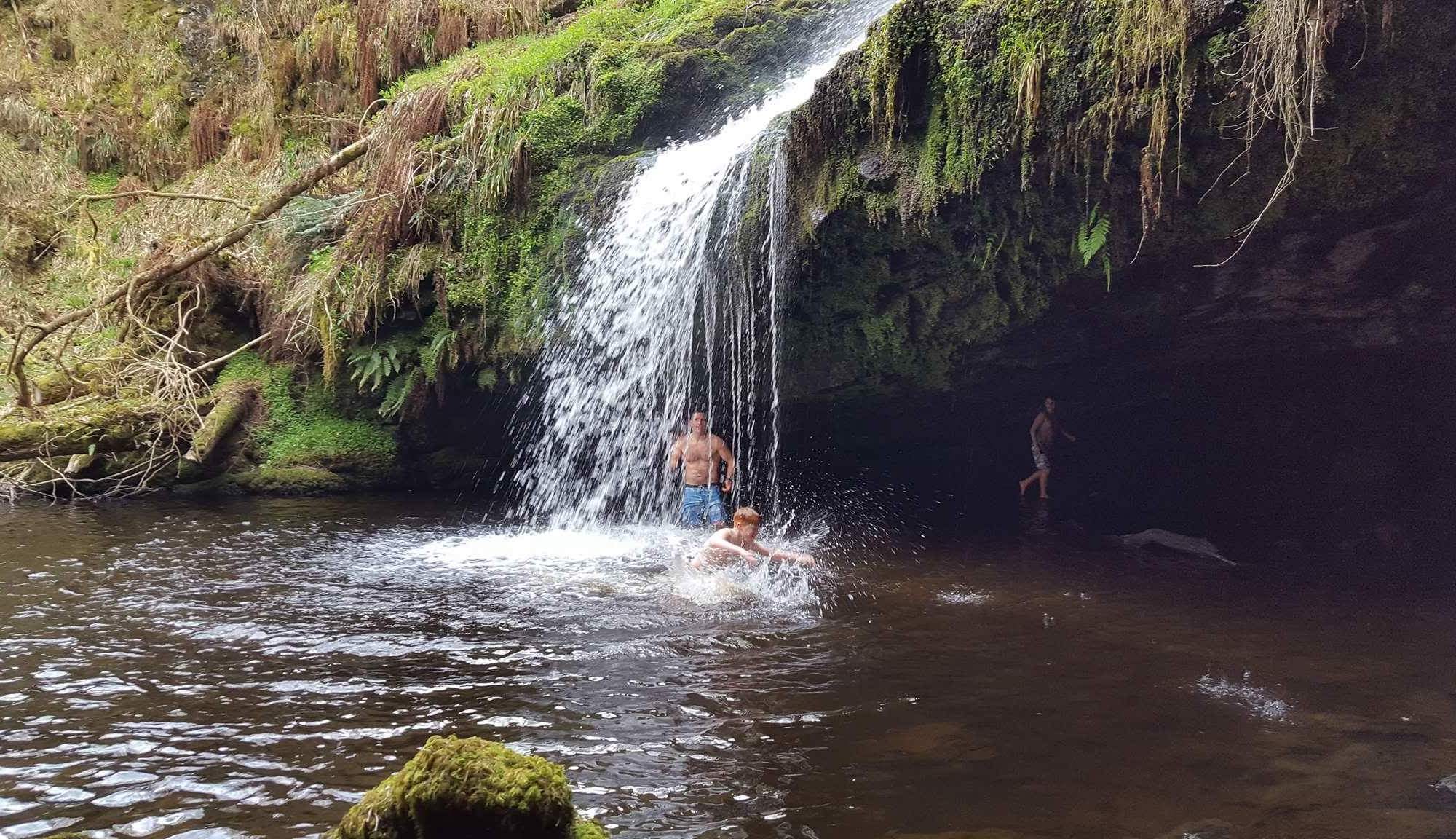 It’s easy to over think any situation. If we considered all the dangers at the start of the day, we would never leave our beds, never mind the house. Do you know, more people die each year from a head bounce down the stairs than wild swimming? It’s strange because I have never been told to stay off the stairs unless I have company but have so whilst wild swimming.

Overthinking….. it’s a curse. Many of us would get to the Loch side and would leave after sitting at the picnic bench, never venturing out into cleansing waters to remove life’s stresses and strains, not with some citrus body wash but with cold water to recharge your batteries, keeping your soul in order. We would leave with unused swimming gear. The flask of scalding tea would never transpire, (in case of a scalded tongue). The swim that had been planned as a New Years Resolution would be postponed until the temperature got a wee bit more friendly with the idea of floating in the wild surrounded by mountains and sky gnawing at the back of your head with every glimpse of a lake or tarn on the telly. Don’t get me wrong, I am not advocating to overcome this overthinking you do a full on channel assault because you have the ability to breaststroke continuously up and down at you local leisure centre wearing a pink swim cap adorned with sticky out rubber flowers.

We recently took a wee walk round some of Fife’s craggy rocky coastline. Elie’s chain walk is a series of eight chains fixed to the cliffs to allow safe access up, down and round the coast. Schools were closed for Easter and to halt tablets and X box controllers mutating into my sons hands we got out and about a few times. I don’t think it was my fault that all the trails lead to or past fantastic swimming spots…… honest!

We also headed to the Devils Pulpit or the Liars Spring from the TV series Outlander.

We visited the Dundee swimming pool which of course is not wild swimming, but worth a visit to even the balance out with the youngsters on the swimming locations

Touch Waterfall near Cambusbarron was also on the hit list. Great wee walk to get there and then a dip in the very cold secluded waters. Pronounced similar to Loch its not to touch your wetsuit.

Another day we headed to do the zip line and tree walks at Go Ape above Aberfoyle, not for swimming obviously, but on the return journey I was inspired by a comment on my last post so I had a skinny dip in Lake of Menteith……much to dismay, or actually I think it was amusement, to my van full of family and friends. 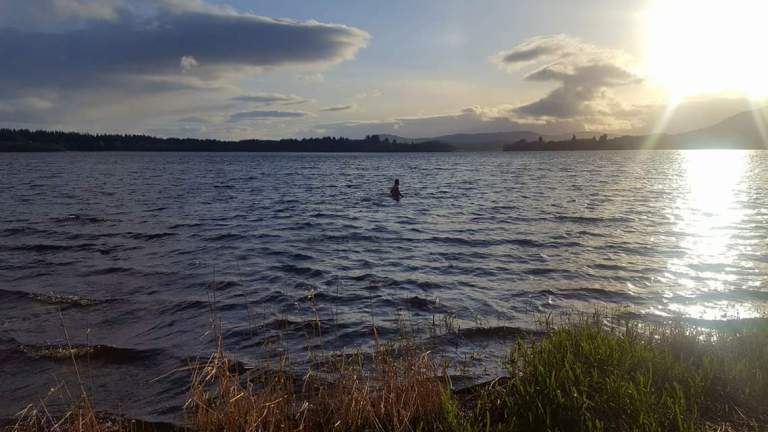 Anyway, back to the Elie Chain Walk. At the end of the chain walk we found an area with a patch of grass for a picnic and high enough rocks to cause excitement and hopefully low enough not to cause injuries jumping into the sea. Guessing the water temperature would be between 7 and 9 degrees, it would be pretty cold but not enough to cause serious problems jumping in but more of a life affirming.

Rock height and water depth are insignificant until a safe exit point was established. (Health and Safety always comes first before a swim/dip). My friend leaped in from a high point then rushed straight out of the water. He is used to surfing in double or even triple the water temperatures we have here in Scotland. I found a rock about two meters up something hopefully my two boys would go for. My friend was the only smart one who brought swimming shorts on the walk……me and my 2 boys were standing in the sunshine…… in our underpants. I jumped in and then climbed out showing my son’s it was safe. Then nice and calmly repeating the instructions jumped in again. I could already see their heads starting to over think as I stayed in the water waiting for them to jump.

Just a wee side line chat here about Temperature – Temperature is derived from a Latin word, (visions of Life of Brian, “What have the Romans ever done for us”?). Temp or time? Temperature is only temporary, the clue is in the name. You might be floating about in the South Pacific with torturous water conditions, close to 30 degree centigrade or standing under the tropical paradise of Touch waterfalls behind Cambusbarron in a balmy 7 degrees centigrade. Our bodies have been installed with amazing thermostats and will start leaking and cooling if hot, or give uncontrollablehands with hypothermic shakes to heat up the body when cold. Generally our bodies will stay at the optimum temperature. Our bodies are awesome. It performs all kinds of magical biological mysterious when you gently stroll from the sandy shore into the sea. There are many pages on Google to describe this transformation. They describe it much better than my ability to so I won’t bore you, all I know are my fingers and toes are still attached after being in very cold water. March is a great time for swimming when the temperatures are above 5 degrees and below 10. Below 5 is bone numbing and really sore but the natural high is worth it. And unless your really determined you won’t find it until next year. Above ten is grand for getting some distance swimming in. In between is about having fun enjoying it even if it means sitting in a foot of water a few feet from the edge, as the gentle waves lap about you. Even better with group of people and there are plenty groups established and Facebook pages for the outside swimming society which is a great way to find and join a group. I have swam with four different groups and never met a grumpy swimming snob. It’s all about the water then smiles and cake afterwards.

I have tried to dismiss temperature as a reason that you are not entering the wild waters. It might be fear. Fear is paralysing. Since giving up chocolate and cider I find it hard meeting and talking to people, it’s really scary without that Batman mask of a sugar rush or the “on top of the world” attitude from 4 bottles of Henry Westons (vintage 8.2% apple juice). I would rather listen and watch than be part of some conversations. Risking life and limb grabbing onto a precariously knotted rope for a 50m zip line over razor-sharp jaggy rocks with no harness is easy. Sober in a room full of strangers without the safety net of a bag of Haribo’s is an effort for me. Life is easier with headphones inserted tapping a description of a watery saga on my phone. Psychoanalysts will be able to tell me why when nearly completely submerged a mile from the safety of a Loch shore side I am perfectly calm but the thought of trying to hold a conversation breaks me into a sweat and why jumping from a rocky ledge into baltic waters is just as easy as recording then letting strangers read descriptions of my family life and my innermost thoughts but I balk at the thought of picking up the phone to tell one of my friends.

Back to the water of the Elie Chain walk………both of the boys had been briefly been in Touch Waterfall a few days before so were aware of the water temperature. My oldest jumped from the rocks with a wee bit encouragement needed. My youngest son’s head completely buckled. I was cold and shaking but we had exhausted every avenue to get him jumping, stepping or just sitting with his feet in the North Sea. I have witnessed his lack of confidence many times during the learning or overcoming process then watch him master activities with little effort once that fear has been dismissed. He is his own worst enemy and it breaks my heart watching that fear overtake him and reduce him to tears. With him when any trial has been over analysed he convinces himself failure is the only outcome. Riding a bike was practically torture, snowboarding is still an ongoing battle (which is a shame as he’s pretty damn good at it once he stops thinking about it). Staying calm and finding new ways for him to accept and gain confidence in his own abilities is frustrating and more times than not you question if its worth the hassle, but retrospectively it’s one of the best bits of parenting is realising you’re not a crabbit, headstrong, shouty, edjit Dad anymore and you can make a difference to their lives by taking a quick breath and a wee behavioural adjustment in yourself which in turn helps them. 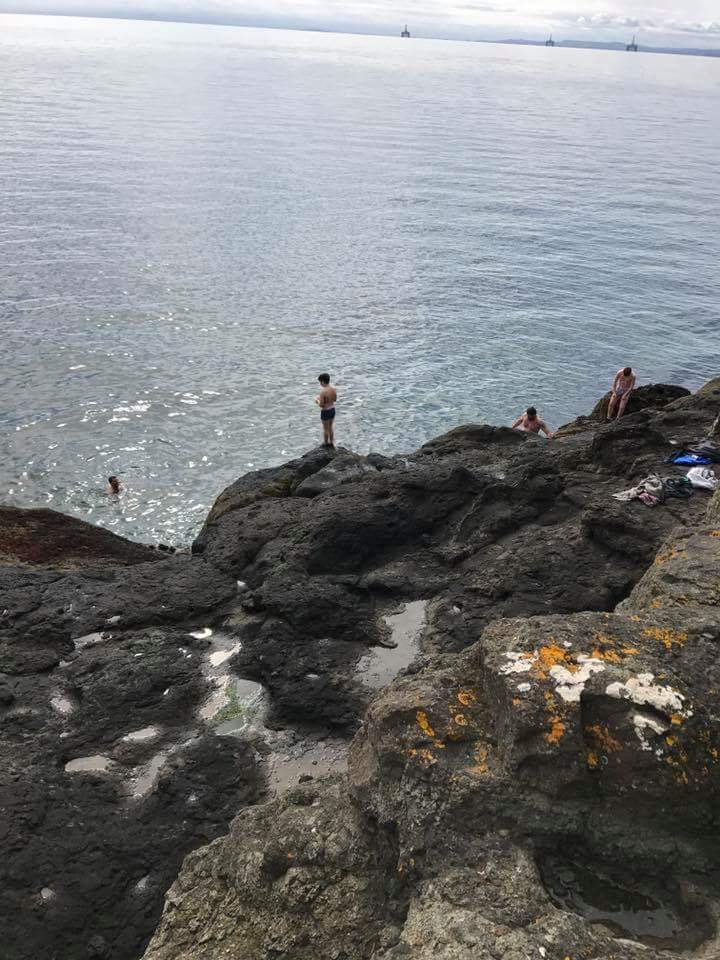 His fear was one of my starting points for this blog post, but it is apparent from several posts on Facebook swimming pages that my son is not the only one fighting his fears. His tears of frustration were from the fact he wanted to but could not make himself enter the water. I hope this story helps some of you face some your fears but please don’t forget to mitigate all the risks. If you’re a rubbish swimmer consider lessons first and it might be worth while swimming with company until experience tells you otherwise. Wear a bright coloured swim cap so you can be seen and consider in investing in a tow-float so other water users know where you are.